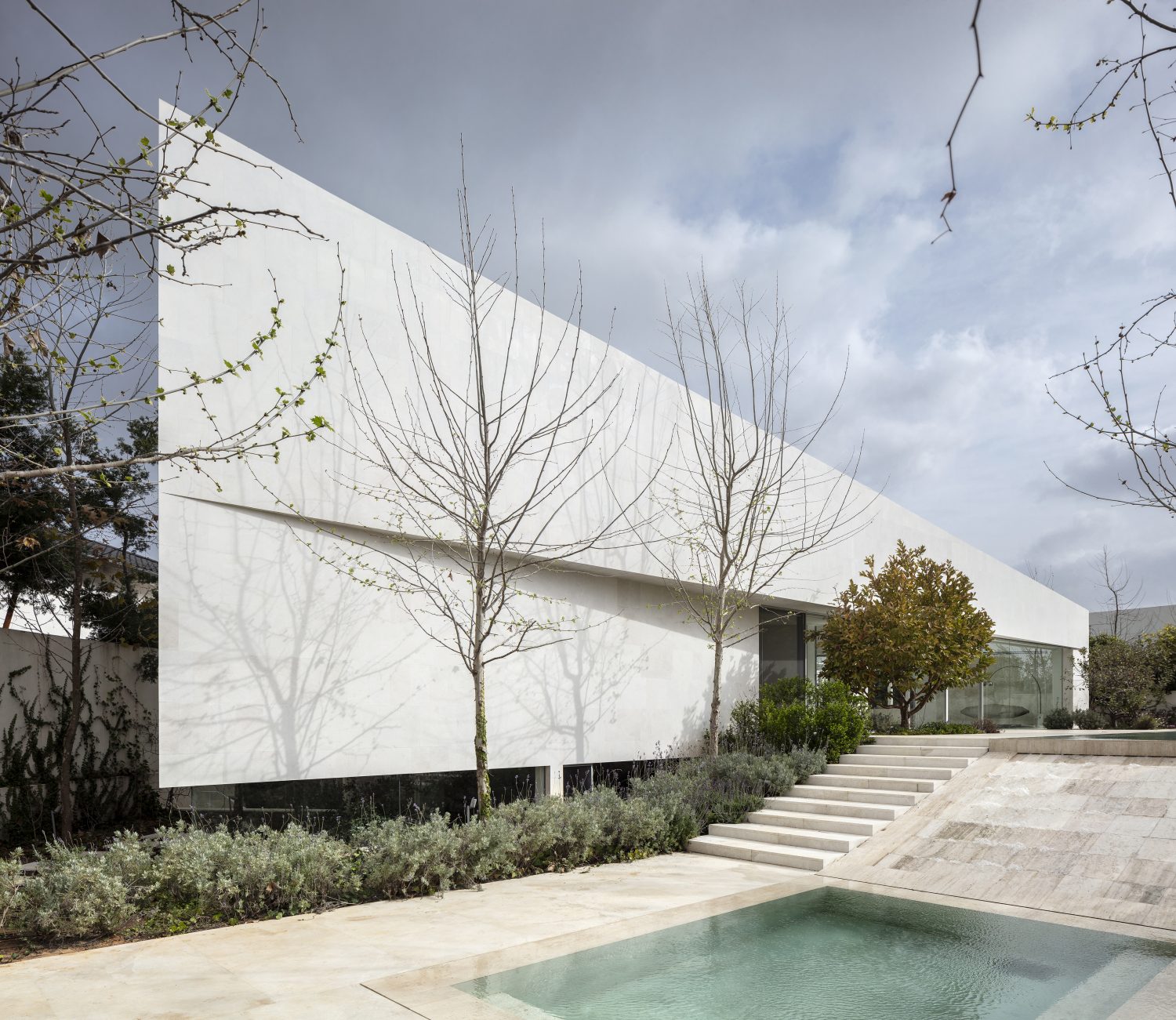 The lines and volume of the IS House aim to refect the distinctive form of its surrounding environment. The house is located on a trapezoid-shaped property with a view of open green space to the southeast. We took use of this perspective throughout the building’s development, which is maintained along… 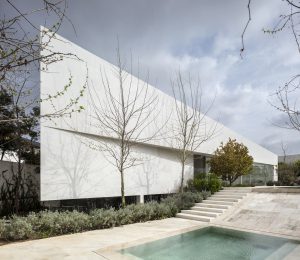 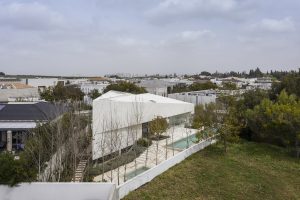 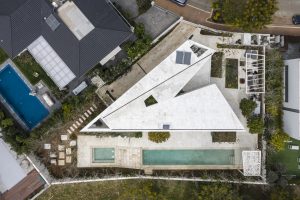 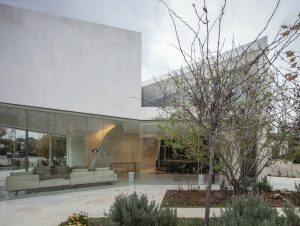 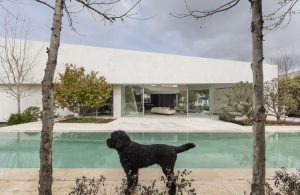 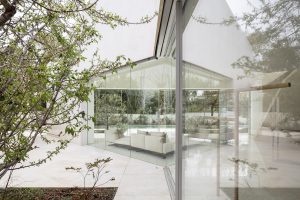 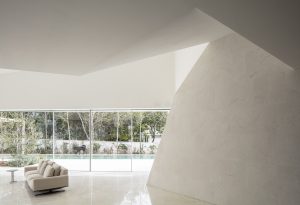 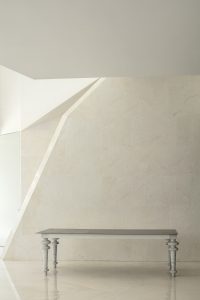 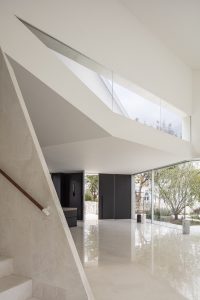 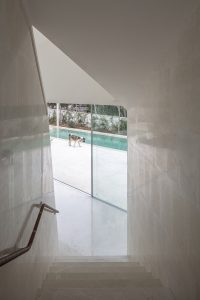 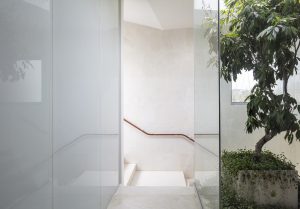 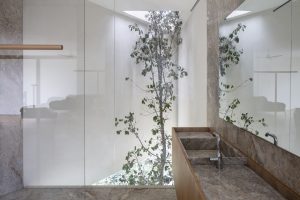 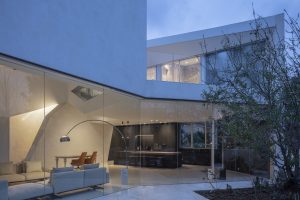 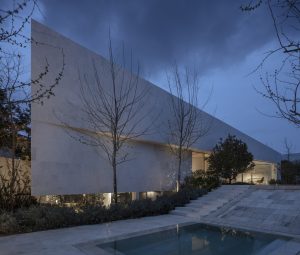 The lines and volume of the IS House aim to refect the distinctive form of its surrounding environment. The house is located on a trapezoid-shaped property with a view of open green space to the southeast. We took use of this perspective throughout the building’s development, which is maintained along the whole primary axis of the home, from East to West.

The area’s form includes some variations in height between the entry zone (55,23 MSL) and the south-western end (53.75 MSL). On the open side, we developed a water landscape with a 30m long pool that leads to a fnal basin at a lower stance in the garden’s greenest segment. We directed the water to this irregular section of the estate, where the two long sides of the structure join and form a point in the dense vegetation. The water fow, similar to a river, fows via a stepped fall kasaneochi1 , formed by juxtaposed stones that follow the direction of the water. As a result, depending on the fow and velocity of the water, it produces a varied sound.

The compositional design idea for this home was to build 600 covered square meters distributed over three stories, while also attempting to create the illusion that this volume does not exist. During the early design phase of this project, the initial ideation was to emphasize and sublimate the dispersed nature that surrounds the estate, as well as to turn essential aspects of the site into its values.

The roof is made by the juxtaposition of two scalene triangles, which are based on the main axis East-West of the house. The axis is the base of the volumetric and organizational order of the house. Starting from the entrance, at +55.25 m, the frst southern part under the roof towards the pool includes the living room, the dining room, and the kitchen. These zones receive light not only from the three sides of the perimetral triangle but also from above, coming from the cut between the ceiling surfaces.

The bedrooms on the bottom foor conclude with a glimpse of the building’s pointy tip. The view from the tip is of a patio with trees that extends from the lower foor (minus 3,15 m) to the upper foor and then to the sky. The stairs connecting the private and public areas lead to the upper level, visually ending on the left side with an indoor garden. This little garden lets in light, encouraging natural airfow between the sons’ rooms, and serves as a green oasis in the main bedroom.

This small garden also works as a meditation place, an intermission along the domestic path, to observe nature and the seasons’ changing, refecting the various atmospheres in the most intimate part of the house. On the right, light enters from the garden terrace, which is placed in the breach between the two portions of the roof.

The frst foor is composed of three areas, one for each son. A space open to the exterior was built for each section, providing the sons with a place separate from the communal spaces of the rest of the house. The room with access to the garden-terrace is located above the entrance of the building and was designed like an independent apartment, facing the surrounding green gardens. The other two sons’ apartments are respectively connected to the patio and the covered terrace. Oblique folds of the roof are visible here, as they were positioned on this foor to provide a continuous vista and that enhances the natural light.

The point at the end of the house appears to hover above the lower portion of the estate, due not only to the diference in height of the region but, also to the glass between the ground foor and the lower level. These broad empty spans were made feasible by the folding of the roof surface and its structural scheme.

The most public areas, the ofce and library, are located on the lower level facing the garden with the fnal pool and the lush vegetation. The area is fully enclosed by glass and is lit from the top as well as from the terrace adjacent to the last point. The wellness area, gym, cinema, and parking are all located on this foor, which is connected to the ground level through a private stair.

The diferences are achieved by ramps and concealed linkages in the gardens, creating a promenade that traverses the various exterior and interior regions. Water, the major visual and acoustic element that mutates the endless refections among the surrounding foliage, the sky, and the glass, is continuously present in the company of vibrant green vegetation.